A planned visit took place yesterday with Tim ZL3TIM being transported to the 4WD road end by me early yesterday morning.    Unfortunately once again we were not able to get the repeater up and running.
We did not announce the visit as we were doubtful about getting Mt Noble running again because of battery problems and the fact that if we announced the visit there would be unwelcome interference by people trying to trigger the repeater which has happened with recent visits in the past.
I picked up Tim at Rangiora 0530hrs and we arrived at the 4WD steep climb road end at 0715hrs.    I waited there and Tim arrived at the repeater site at 0830 hrs. He reported that the equipment was on site that had been delivered by the Iroquois helicopter a couple of weeks ago.
Tim was checking the power supply feeds from the wind generator and present solar panels and found that one solar panel was not working.  He replaced a diode on this solar panel and reported that both wind and solar were delivering a good charge to the batteries.    This charge initially started a 4 amps from each source and varied during the day depending on wind strength and direct solar availability.    Note that there was very gusty and strong NW winds sand clouds passing overhead during the day.   At peak charges wind and solar were delivering at over 6amps each at times.
Of major concern is the present condition of the batteries.    For some weeks now the batteries have been below 8.8volts and when some charge comes on there has been transmissions and the voltage reduces and goes off air again.
Tim spent some hours attempting to get the repeater working again and you may have heard a solid carrier transmission early afternoon for about 5 mins,    There appeared to be a further problem with the receiver and as we had a deadline to get home Tim had to make the decision to call it a day and he left the site and was back at the vehicle at 1530 hrs.   He had turned the site off and reported that the charge to the battery was over 11 volts when he left.

At this stage the main aim of the visit was to sort the batteries out which has been achieved.    We are concerned about the capacity condition of the present batteries which them being at a low voltage condition for so long since lockdown and more recently with even lower voltage read outs.
Tim has removed the receiver from the site and brought it home to be bench tested.   So there will be nothing heard from the site until it is revisited and we will await the results of the receiver check.
Mark ZL3AIC will be checking the wind equipment and bearing so that can be re installed on Mt Noble.
Consultation took place between Tim, myself and Mark during the site visit yesterday.    Travel time was about 2 hrs 15 mins each way.
We are another step towards getting the repeater up and running again.

I would also like to acknowledge the keen support of the landowner, Jimmy Frame, with whom we checked in with on our return through his property yesterday.    Not forgetting the two helicopter companies that have also assisted us in helping transport equipment to the site.

Tim is to be commended for his time and efforts and I thank Branch 68 for their support in keeping this remote repeater site going as once again a lot of time, effort and sweat has been put into the site by many people over the many years it has been in operation. 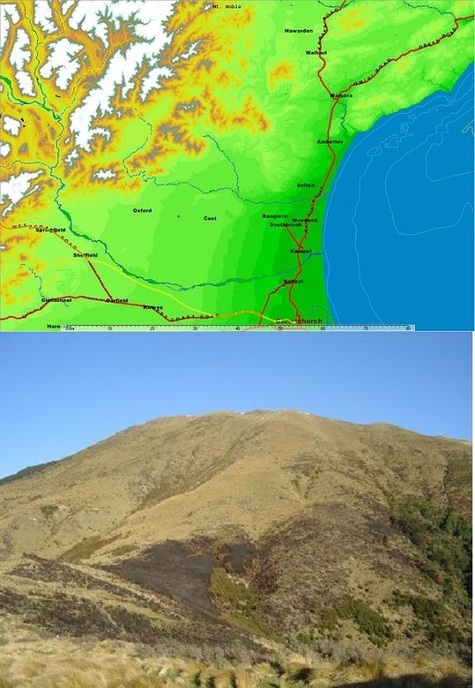 This map gives you an indication of where Mt Noble (top centre) is in relation to Christchurch (bottom right) on the South Island of New Zealand.

This is Mount Noble which has limited access due to being on privately owned land. 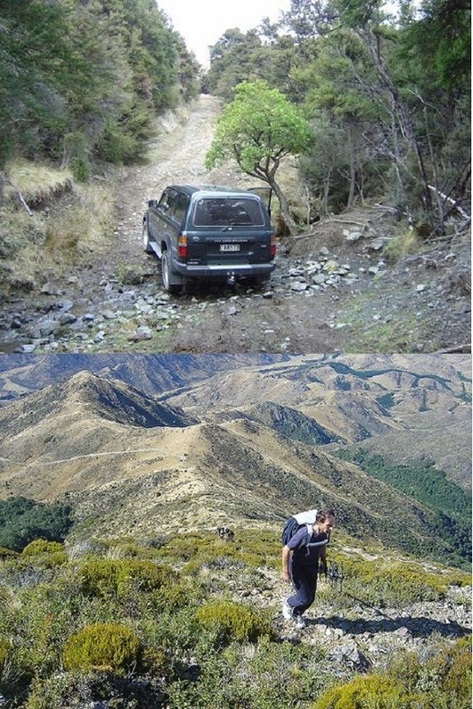 A four wheel drive is a must to begin this journey.


Followed by an energetic walk that is recommended for only the fittest amongst us. 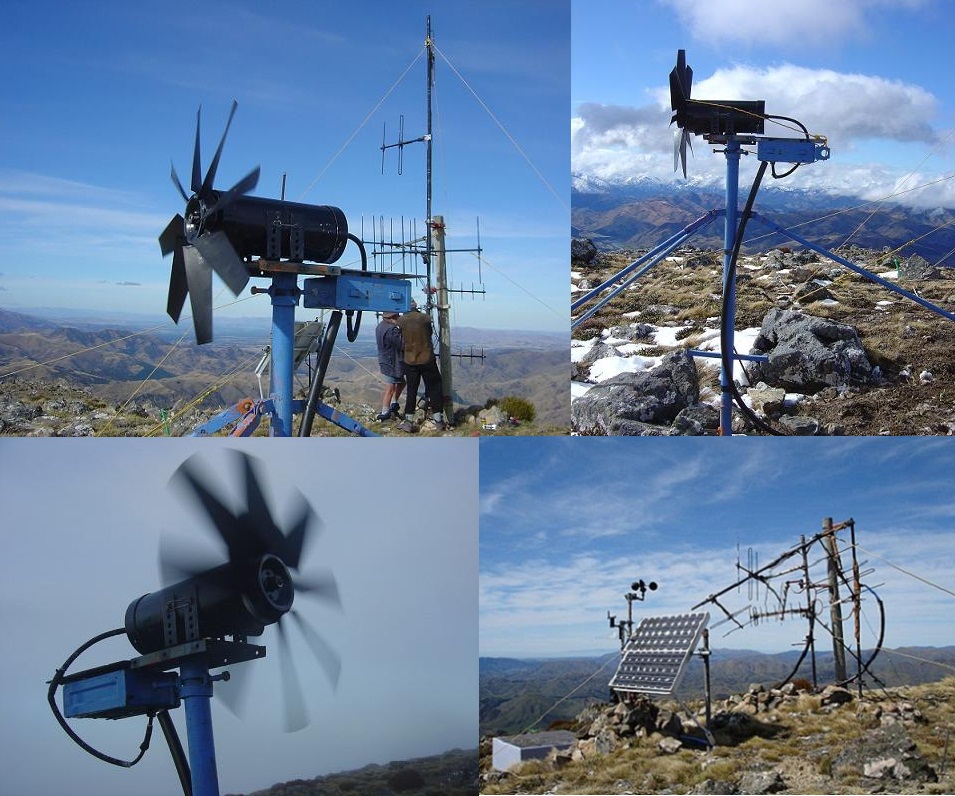 Maintained by a dedicated team of enthusiasts 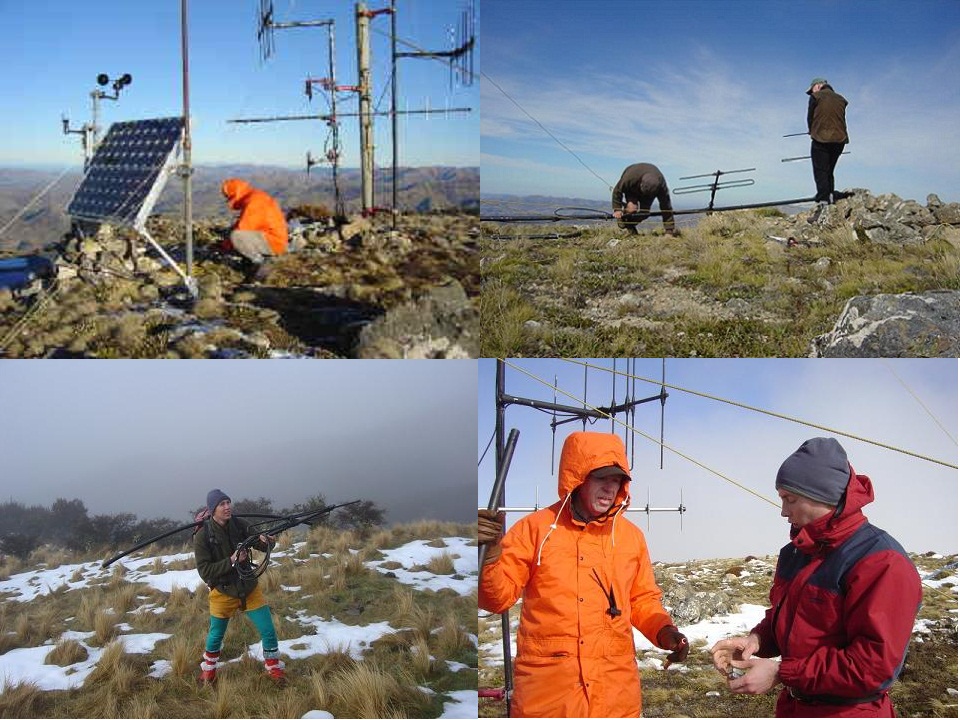 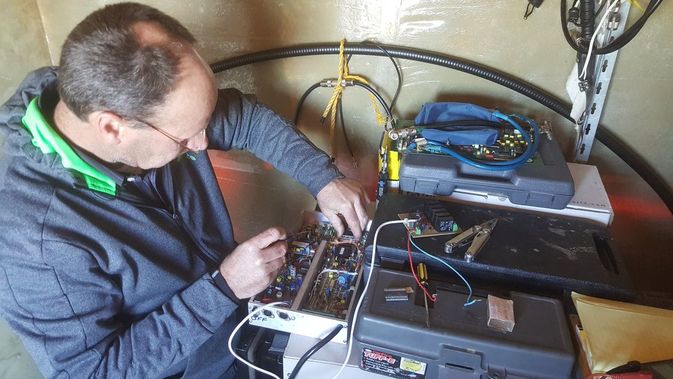 Visited by the locals who leave their mark 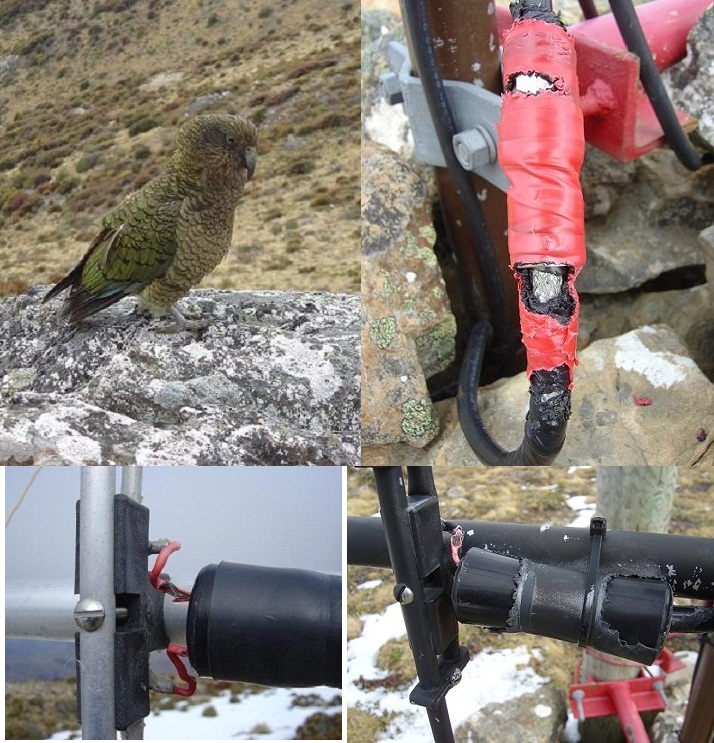 The Mt. Noble 6975 Repeater was the culmination of a number of repeater projects covering more than twenty years.


The first 2 metre repeater in ZL was set up by Christchurch Branch 05 in 1969, the same year the North Canterbury Amateur Radio Club was formed. In line with commercial practice at that time, the mode of operation was AM as was most of the early two metre operations throughout the world. FM mode, however, was also being pursued and would ultimately prove both superior and the preferred mode. Some of the Club members were already beginning to think along these lines and in December 1972 a VHF Group was formed
specifically to research and build a FM Repeater. Progress, over some months, was going reasonably well when the club member in charge of the project suddenly left the district, taking the project materials with him. A dispute over the ownership of said materials was never resolved, and the project had to be abandoned.
The VHF Group was wound up in November 1974.

By the mid-1980’s, Br. 68 had a definitive interest in the Hurunui / Amuri Basin area. Radio training classes were being run by Ernie Scrivener ZL3OV at Hawarden and in due course a number of new callsigns were to appear. Christchurch Br. 05 by this time had its 146.750 FM repeater (675) on Marleys Hill, above the city.
It had also been involved in assisting the Marine VHF Assn. in setting up their new repeater on Mt. Herbert, high on Banks Peninsular. From this came the opportunity to erect a new Amateur repeater at almost twice the altitude of 675 and therefore the potential for a greater service area. With Br. 05 now working on their new repeater project, it seemed worthwhile for Br. 68 to collaborate with them, for its new project, especially for sourcing of components, materials, etc. Both Branches had applied for suitable repeater channels, with 147.050 (705) being allocated to Br. 68, and 147.250 (725) for Br.05. Mostly for financial reasons, progress on the North Canterbury repeater was rather slow, and at the same time, projections of the expected coverage of the new repeater on Mt. Herbert into our area were such that it began to look more and more as though it would likely duplicate a very large proportion of the expected coverage from our own repeater. For these reasons the decision was taken in May 1987 to cancel the Br.68 project, and therefore the 705 allocation was
not taken up. In September 1989, by which time 2 metre mobile operators, in the city in particular, were experiencing extreme interference problems, principally from computers, and so Br.05 opted to take up the 705 allocation, greatly reducing the interference problems. Meanwhile, after 725 came on stream, Club member John Powell ZL3TRW, who was employed by the ﻿Waipara ﻿County Council, (then to become the Hurunui District Council) and in the course of his work was able to carry out extensive testing of 725 coverage, the verdict being that it did NOT project well into the area at all, and access by the new licencees being difficult if not impossible to achieve. This prompted renewed interest in a repeater for this area.

In early 1993 investigations began for a suitable repeater site, with emphasis on the ability to cover the Lk. Sumner and Upper Hurunui area, and with possible future extension across the Alps. In April the first tests were made between Mt. Terako / Mt. Lyford (north of Waiau) and the Lakes area without success. Next came tests from sites on both Mt. Alexander (near Waikari) and Mt. Noble (to the West of Harwarden) into various areas which showed great potential, especially from Mt. Noble. In May 1993 a cross-band mini-repeater was erected on Mt. Noble and this proved very successful. Having found a suitable mountain then came the work of building and equipping a repeater shelter. This was constructed of fibreglass by club members, fitted out and transported to a test site at “The Peaks”, Hawarden, the property of Pat Power ZL3UPP. This was at an altitude of 380m. The frequency of 146.975 (6975) had been allocated and the repeater came on air on 6 July 1994. Then on Saturday 28 July it was lifted by helicopter onto its permanent site at 1210m. Some 10 months later, on 20 May 1995, a day of helicopter flights was arranged for those members and friends with an interest in the repeater, and as a means of saying Thank You to those who helped on the project. More than 30 people took this opportunity.

Not long after 6975 was established, there was felt a need for a UHF repeater also, and this was set up, initially at the Clubrooms in Rangiora, on the frequency of 438.700 (870). In due course it was moved up to Mt. Noble. Unfortunately, someone forgot to notify the authorities and there was much embarrassment when an “explain please” communiqué duly arrived. Thankfully the explanations were accepted and the mistake was quickly rectified to the satisfaction of all.

870 did not prove to be a popular repeater, carrying very little traffic, and with interest growing in the possibility of linking Mt. Noble to the Greymouth repeater on Sewell Peak, it was decided to utilise the UHF repeater as the link directly into Greymouth 8575, the appropriate licence and frequency change duly completed. Next came the need for control, the ability to shut down if necessary and other functions as needed. We were fortunate to have the help and abilities of a team led by Pete Robinson ZL3TJH who came up with a most unique control system which included weather reporting.

It had been noted that there was a high maintenance requirement at this site especially antenna parts coming loose or getting broken and wind generators failing. With the advent of the weather reports it soon became obvious that there are extremely high wind velocities across the mountain and a check of the geography reveals why. The predominant wind is from the ﻿Northwest﻿, and the Hurunui River valley from near its exit at Lake Sumner to where it turns to the NE around the foot of Mt. Mizar, is aligned in a NW – SE direction with the wind funnelling down the valley until it hits the base of Mt. Noble standing right at the end of the valley. This forces the wind up and over the mountain and so causing the continual damage to the repeater site.

Owing to its remoteness the only practical means of obtaining power at the site is by means of solar and wind. It is therefore necessary to keep power consumption as low as is practical. This is achieved by the ability to reduce output power on 6975 and to switch off the Tranz-Alpine link at the times (especially winter) when there is insufficient charging capacity to maintain the complete system.